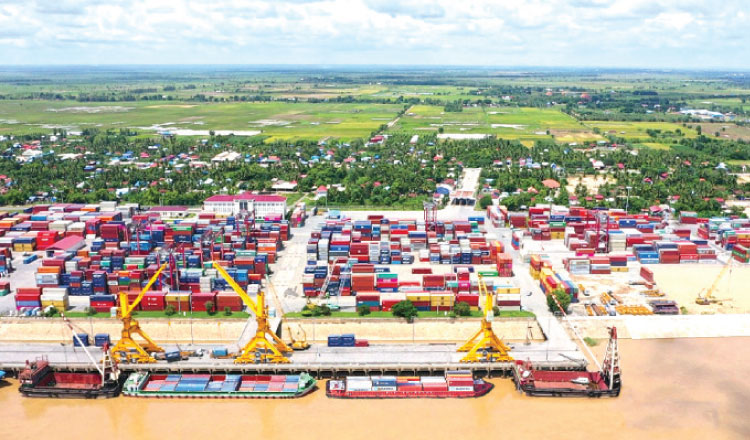 The Cambodia Securities Exchange-listed Phnom Penh Autonomous Port (PPAP) has maintained a stable financial position during the first 10 months of 2020, despite the economic headwinds posed by the pandemic. According to unaudited documents submitted to the Securities Exchange Commission of Cambodia and released by the CSX this month, PPAP’s 2020 October monthly revenue was listed at $2,060,978. Last month’s results brought in a total revenue of $24,325,853 for the first 10 months of 2020, a slight decrease of 0.29 percent compared with the $24,397,076 that the first 10 months of 2019 generated. Harrison White spoke with the Phnom Penh Autonomous Port about how the company has managed its operations in order to maintain its revenue and remain profitable. During the conversation, Phnom Penh Autonomous Port Deputy Director Hei Phanin outlined the company’s current businesses model, its position on being a publicly-traded company and its future direction. KT: How would you describe your current business operations during the first wave of the COVID-19 pandemic? Comparing business and service results over the same period last year, cargoes and gas fuel decreased 3 percent to 3,080,544 tonnes, cargo vessels by 2.17 percent to 1,936 units with containers increasing volume by 2.88 percent to 241,929 “TEU [Twenty-foot equivalent units]”. However, passenger freight fell significantly with passenger boats dropping 58.96 percent to 126 units and passengers declining by 61.02 percent to 9,733 people. The first nine months of 2020 saw container traffic increase 4 percent compared with the same period in 2019. Revenue saw an increase of 3 percent. PPAP had forecast 10 percent growth in container traffic for 2020 however, because of the pandemic, actual traffic may remain at the same level reached in 2019. So, although actual traffic is lower than what was forecast, PPAP has been fortunate to be not as hard-hit as other ports in the region. KT: Many businesses have struggled during the pandemic, especially listed companies. How has PPAP overcome this situation? As per the government and board of director’s direction, PPAP reviewed its planned expenses for 2020. Some projects have been cancelled or delayed until 2021 or subsequent years. However, the majority of expenses are infrastructure development plans that have already been committed to, such as the phase III expansion of LM17 (the name of our container terminal) which takes place from 2019-2021. On the other hand, PPAP has been actively seeking other sources of revenue such as attracting general cargoes handling and providing logistics services to customers. For the day to day operation, PPAP continues to look for areas of improvement in order to minimise costs and increase efficiencies. KT: What services are PPAP currently providing for its customers then? PPAP has main revenue sources such as stevedoring (the act of loading or offloading cargo to and/or from a ship), lift-on lift-off (LOLO) and port due and charge. However, for the last couple of years, we have undertaken a sustained effort to diversify to other sources of revenue including providing logistics service, trucking, customs clearance to customers. KT: PPAP has been a star stock of the local exchange. How will the company continue to build trust among and engagement with more investors for stock trading in the CSX? Will you increase your dividend, an ongoing complaint of investors? Investors tend to look at the company’s profitability rate, long term plans and dividend policies for their decision making. Fortunately, PPAP has one of the highest profitability rates because of its effort to diversify into additional sources of revenue while continuously streamlining expenses. PPAP has clearly set out its short-, medium- and long-term plans, which are communicated to and carried out by all levels within the company. Since the initial public offering in 2015, PPAP has always distributed dividends higher than the guaranteed rate (which is 5 percent of the original initial public offering price). The dividend has increased steadily, in a sustainable manner. PPAP has been able to implement further infrastructure expansions by using its own fund, delaying any need to seek additional loans. KT: As the global economy hopes to return to some normality post-COVID-19, what is PPAP’s plan for next year and beyond? PPAP remains hopeful that container traffic will pick up next year as the pandemic subsides and the economy recovers. The phase III expansion will be completed and ready to absorb this recovery/growth. On the other hand, PPAP continues to push its plan to create additional small-scale multipurpose terminals along the rivers in order to encourage the use of inland waterway transportation, especially for agricultural products. PPAP is actively looking for a partner or investor to develop the special economic zone near the port area in order to generate additional traffic. The Port Commercial Zone is 166 kilometres stretching along the Mekong river, 160 kilometres from Tboung Khmum to Neak Loeung and other 6 kilometres along Tonle Sap river. In 2015, PPAP obtained the exclusive right as port operator within the Port Commercial Zone. As of the close of business on Friday PPAP was trading at 11,680 riels a share, an increase of 10 percent from its 2019 average share price of 10,342 riels. Its 2018 average was 5,745 riels.
News In English កំពង់ផែស្វយ័តភ្នំពេញ