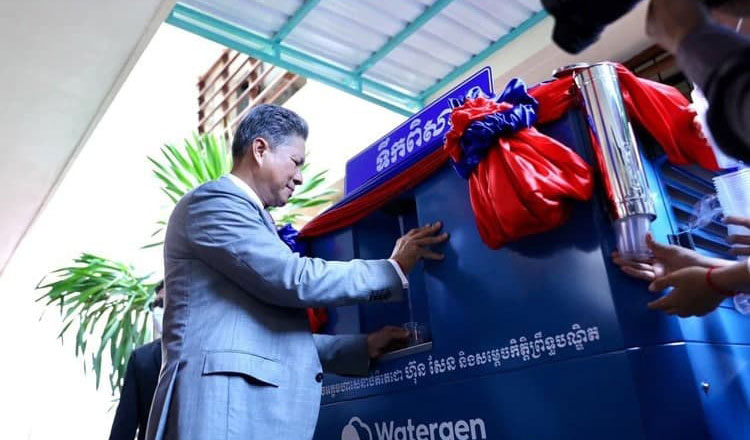 The Khmer-Soviet Friendship Hospital in Phnom Penh received a water dispenser donated by Prime Minister Hun Sen Tuesday. The handover ceremony was held at the hospital was presided by Sun Chanthol, Senior Minister, Minister of Public Works and Transport. According to H.E. Senior Minister, this is the 4th water dispenser given to hospital. The first three machines have been handed over to Calmette Hospital, Kantha Bopha Children’s Hospital, and the Cambodian Red Cross. The last one will be offered to Cambodia-China Friendship Preah Kossamak Hospital. Mr Chanthol also announced the donation of $10,000 from SCI Company that imported the machines to the Khmer-Soviet Friendship Hospital. He took the opportunity to thank the Prime Minister and his spouse for the donation and highly appreciated the crucial role played by the Khmer-Soviet Friendship Hospital, especially in this COVID-19 period. The water dispensers are made by Watergen, Israel-based company that develops water-from-air solutions. Each of this dispenser can provide 800 litres of safe and clean water per day.
News In English ម៉ាស៊ីនផលិតទឹកបរិសុទ្ធ ឯកឧត្ដមទេសរដ្ឋមន្ត្រី ស៊ុន ចាន់ថុល