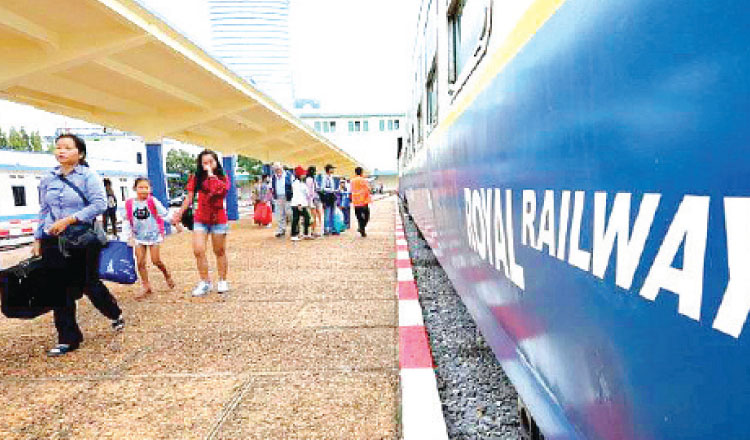 Negotiations are still under way between Royal Railway Cambodia and the Cambodian Government on implementing a new concession agreement designed to improve Cambodia’s railway systems as well as keeping the infrastructure running in an orderly manner. Up to now, an agreement has yet to be reached between the two. Royal Railway’s debut dates back to 2009 when the government signed a 30-year concession agreement that allowed Toll Cambodia Co Ltd – a joint venture between Australia-based Toll Holding Ltd and Royal Group of Companies Ltd at a 48:52 percent equity, respectively – to manage the operation of the railway system in Cambodia. In 2014, Toll Holding transferred all its shares to its local partner, making Royal Group the sole shareholder. The company was renamed Royal Railway Cambodia. Prime Minister Hun Sen said in early 2019 that the government was not capable of taking over and operating railway services because it lacked the ability. At the start of this year, however, agreements were made on the start of a new concessional agreement between the two because the old agreement could no longer be implemented. The new agreement being discussed is that the Royal Railway not only operate the railway but also rehabilitate it because the government does not have the budget. Vasim Sorya, spokesman for the Ministry of Public Works and Transport, said: “If we take a look at the previous concessional agreement, the government were expected to spend money on fixing the railway and the private sector were to be in charge of operations. However, the government no longer has the budget to fix the railway, so the old agreement cannot be implemented. What we want now is for the company to rehabilitate and operate Cambodia’s railway infrastructure. However, Royal Railway only wants to take on the operations and leave the development side to the government. The Ministry of Economy and Finance does not have the money for this. Because of this we are still in negotiations.” Royal Railway is in talks with CRRC Corp Ltd, a Chinese state-owned and publicly traded rolling stock manufacturer, that could help it to develop Cambodia’s railways. It is the world’s largest rolling stock manufacturer in terms of revenue, eclipsing its major competitors of Alstom and Siemens. A CRRC representative said that the firm has developed 21,000 kilometres of railroads in China and abroad. CRRC has showed a willingness to enter negotiations for the proposed partnership with Royal Railway.
News In English H.E Vasim Sorya វិស័យផ្លូវដែក