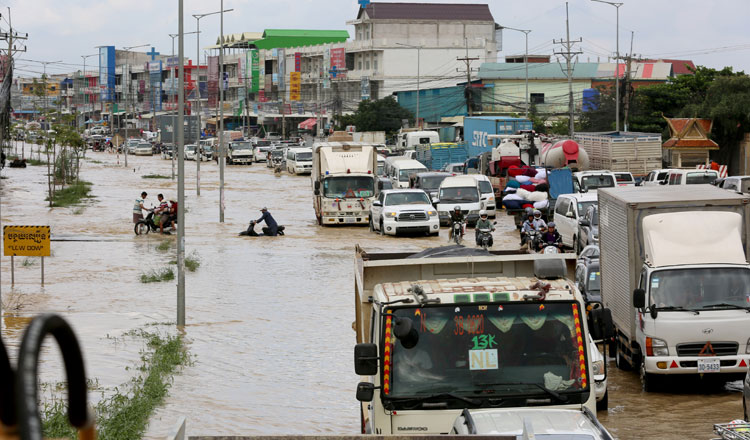 Flooding has caused delays in the goods for many days as national roads suffer damage, costing the country’s economy dearly because the government will have to spend more on repairs. Sin Chanthy, president the Cambodia Association (CLA), said that even though the effect now is currently low, further delays in goods to from the capital will have a huge impact on production chains. “We hope that the situation will be better in the next few days but if it continues for another week, the impact will be huge. Goods is getting blocked is affecting some production,” he said. However, Chanthy said the specific impact has not been estimated yet because it is early days. He said if it had happened before the COVID-19 pandemic, such a delay would have had a strong effect and cost the economy more. “In just a few days, we haven’t seen a serious impact on both the demand and supply side because the sector has already been reduced by COVID-19,” he said. “Now some factories are also flooded so the demand for raw materials is not so urgent during this period. The order is also not huge like before the COVID-19, so a delay just a few days does not have a serious impact.” According to Chanthy, there are normally around 300 to 400 goods lorries on the road daily. He said the most-affected sector is garments footwear, followed by agriculture products. National Road 4, connecting Phnom Penh to the country’s deep-sea , the Kingdom’s main international economic gateway, has suffered damage caused by heavy rain that saw more than 300 trucks banned from entering Phnom Penh for a few days. Chanthy said that the road damage is adding to the existing traffic congestion, doubling journey times. “Before it took us around five hours but now we spend up to eight to 10 hours to from Phnom Penh-Sihanoukville – that costs us,” he said. The government abruptly scrapped toll fees in 2016 for National Road 4, ending a controversial 15-year contract with AZ Distribution Co but limiting sources finance for repairs. However, Chanthy said that after 2023 the Phnom Penh-Sihanoukville express- way, which is now under construction will play an important role to promote Cambodia trade with international markets. The floods have so far affected a total 344 kilometres national provincial roads across the country, according to a report by the National Committee for Disaster Management. A report shows the floods have affected 1,459 kilometre rural roads. Hong Vannak, a business researcher at the Royal Academy Cambodia, pointed out the railway is not fully used now so when the roads are damaged by floods it has huge consequences for the sector. “The government needs to release a special package to urgently restore the damaged roads because Cambodia’s sector currently is mainly dependent on road ,” he said. Vannak said the National Road 4, which was previously given to AZ, was regularly maintained. He said building a good quality road will provide a huge benefit to the economy. “If poor-quality roads are built, it will cost the economy hugely because the government borrows from development partners donors so we need to care about the quality as a priority. Road-infrastructure development costs more money than other sectors,” he said.
ជំនន់ទឹកភ្លៀង ផ្លូវជាតិលេខ៤ News In English