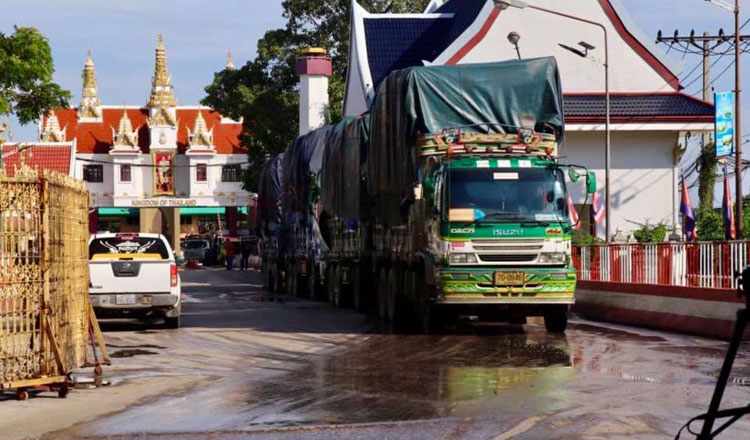 Traditional handicaps such as a lack of supportive infrastructure, lack of ease of doing business and high production costs remain priorities to be urgently addressed by the government if the country is to boost its regional trade competitiveness, say observers. According to a Ministry of Economy and Finance’s official, Cambodia has already offered potential resources for investors such as a high population of young labour. Low wages are also one of the country’s most attractive conditions compared with neighbouring nations. In an effort to narrow the otherwise uncompetitive gap, the government is promoting road infrastructure to give impetus to the transportation sector. The nearly-$2 billion Phnom Penh-Sihanoukville expressway is under construction. A study on the construction of an expressway linking Phnom Penh to Bavet city on the Vietnam border has been completed, while there is also research into a railway linking Phnom Penh to Bavet city. Phnom Penh Logistics Complex (PPLC), which is a potential centre to promote Cambodia’s transportation sector to be more efficient and competitive with countries in the region and the wider world, is under progress. Meas Soksensan, the Ministry of Economy and Finance (MEF) spokesman, said that, in reality, Cambodia is already an attractive place for investors in terms of labour force and investment environments that have been improved over recent months. “We are an attractive destination for investors because we have just opened new markets with partner countries and what we need to do is to increase more local production chains to extend our existing exports,” he said. Related to the challenges of high production costs, Soksensan said that the government is doing well and doing it gradually, such as reducing electricity tariffs to make the country more competitive. “We are already aware of the challenges so far and have been talking a lot about the issues with the private sector. And these matters are high on the government’s agenda to address,” he said. Sun Chanthol, the Minister of Public Works and Transport (MPWT) said during a discussion on the draft law on ports that the law aims to manage and develop ports and promote national and international trade. He said this is a part of promoting the country’s trade and investment competitiveness. “This will support national economic development and maintain order for port development, facilitate port users, provide fair investment opportunities, ensure port security and contribute to environmental protection,” he said, adding that the law must match international law on port management. The report from the MPWT noted there are a total of 78 river ports located along the Mekong, Tonle Sap, Tonle Bassac and other regions, with 27 seaports across the country. These ports are divided into commercial, industrial, tourism and oil ports. Some are public and some are privately owned. “These ports play an important role in promoting all kinds of trade activities in the national, regional and international economic development process,” the minister said. Sin Chanthy, president of the Cambodia Logistics Association (CLA), said that developing infrastructure such as roads and railways is important for the country’s competitiveness. “Our current railway from Phnom Penh to Sihanoukville is less used because it takes a longer time to travel than by road and also because the railway is not directly connected to the container yard,” he said. “We need to transfer containers from the train to trucks and resend them to the port, which costs a lot of money. That’s why we still see goods transported by lorry, which takes a shorter time.” He said while Cambodia already has a logistics master plan, the slow infrastructure development may result from a lack of financing and the government needs to find investors to carry out the projects.
ច្បាប់កំពង់ផែ​ News In English ច្រកទ្វារព្រំដែនអន្តរជាតិបាវិត វិស័យដឹកជញ្ជូនផ្លូវទឹក វិស័យដឹកជញ្ជូន