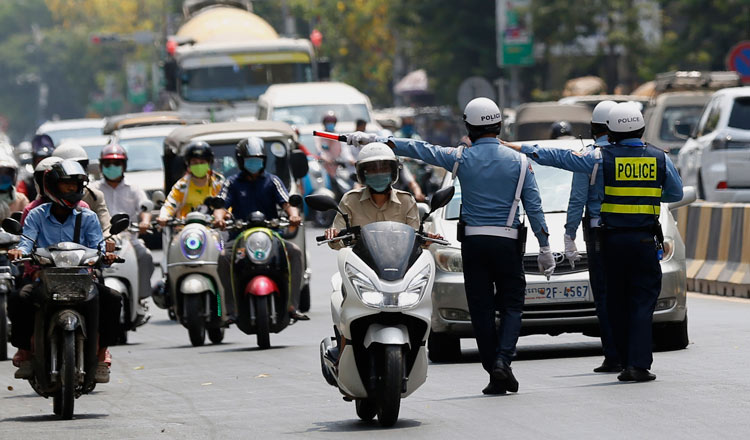 The government has decided to postpone the implementation of heftier fines for traffic offenders until May 1 so there will be more time to train officials and to educate the public. The decision was made during the meeting to disseminate the new sub-decree on fines for traffic law violators at the Ministry of Interior on Friday. Interior Minister Sar Kheng, who is also head of the National Road Safety Committee, said during the meeting the government had yet to implement the new sub-decree because the summons slips had not yet been published and more time was needed to train officials and explain to the public about the amendments to the Traffic Law. “We will continue to disseminate information and educate the public. We have decided to postpone the implementation of the new fines in order to allow them to be clear about the amendments from now until April 30,” he said. “Therefore, from May 1 onwards the new fines will take effect.” “If we carry out [the implementation] without the proper summonses, they [the public] would accuse us of implementing it inappropriately,” Mr Kheng added.“However, the postponement does not mean we will suspend traffic management. Our traffic police officers will still continue enforcing the laws.” On March 17, the government issued a new sub-decree by adjusting the Traffic Law on the punishments and fines for traffic violators in order to help reduce traffic accidents. The amendments include some articles which increase the severity of punishments with fines raised from three to five times the current amounts. The new sub-decree has stipulated fines be increased from about $15 to about $1,000 for road traffic law violators, including motorcyclist without safety helmets, disobeying traffic lights, using mobile phones while driving and driving under the influence of alcohol. During the meeting Mr Kheng also issued instructions on promoting road safety in Cambodia, as 2020 is the year targeted for strict law enforcement of the Road Traffic Law. National Police chief General Neth Savoeun said during the meeting traffic police officers across the country will continue to strengthen their capacity to disseminate information about the stricter traffic laws. Buon Sakhan, a 38-year-old Phnom Penh resident, said yesterday he supported the decision to delay the implementation of the new sub-decree since Cambodia is dealing with COVID-19. “The delay is a good thing, because people are currently concerned about the virus,” he said. “Normally, the implementation of new laws requires time for the people throughout the country to be aware of them. They cannot be implemented immediately, as it will make people unhappy and become dissatisfied with the authorities.”
ច្បាប់ចរាចរណ៍ផ្លូវគោក