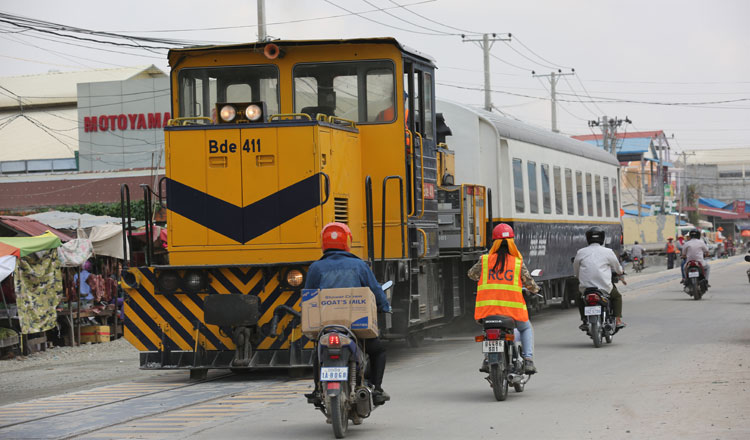 The Phnom Penh International Airport railway tracks spanning busy Russian Boulevard will be covered over with a protective layer of sand and bitumen in order to save on maintenance costs, according to the Royal Group. The railway line, currently not in use because of a lack of passengers, is slated to become operational in the future when deemed viable. Ly Borin, under-secretary of state at the Ministry of Public Works and Transport in charge of railways, said: “The [current] airport will soon be moved to a new location. [Since the pandemic], we have [not] run the train service [so] leaving the rail track [as is] may [present a] danger to commuters.” Royal Railway Chief Executive Officer John Guiry clarified that the track will be covered (rather than removed) until the COVID-19 situation is under control and that it will resume service again in the future. “The tracks will be covered [until] the COVID-19 situation relaxes worldwide and flights start to resume. This makes sense to us because it saves money on track maintenance costs. There is no [demand] for this service until things start to go back to normal. When that will be, nobody is really sure,” Guiry said. The shuttle train service between Phnom Penh International Airport and Central Station in Phnom Penh was opened to the public on April 10, 2018. The Royal Group spent somewhere between $1million and $2 million on three double-headed train carriages manufactured in Mexico for the airport shuttle in 2019. The carriages will not be wasted with the closure of the track though, according to Guiry. Guiry explained, saying that because there was a need for the carriages in both Sihanoukville and in Poipet, that they will be sent to those locations straightaway. He added that this avoided having expensive assets sit unused. The news comes around the same time that the Ministry of Public Works and Transport updated the status of several feasibility studies for Phnom Penh mass transit projects. A study on the sky train proposal linking Phnom Penh city centre with the airport is complete and has been deemed as too expensive. Studies on the feasibility of a subway (underground) and a monorail project have yet to reach their conclusion. Ly Borin noted that studies of this magnitude take time because of their associated high investment costs. He added that, “[While the sky train study] has been completed, and the cost deemed too high, [the final choice] really depends on the government.” The Ministry of Public Works and Transport had previously revealed that the three choices – sky train, monorail train and subway train – were the options under consideration. Once all three feasibility studies are completed, the ministry will compare and analyse them to decide upon the best fit. The cost of the new train system project is projected to be between $1 billion and $1.4 billion.
News In English រថភ្លើងភ្នំពេញ-ព្រលានយន្តហោះ