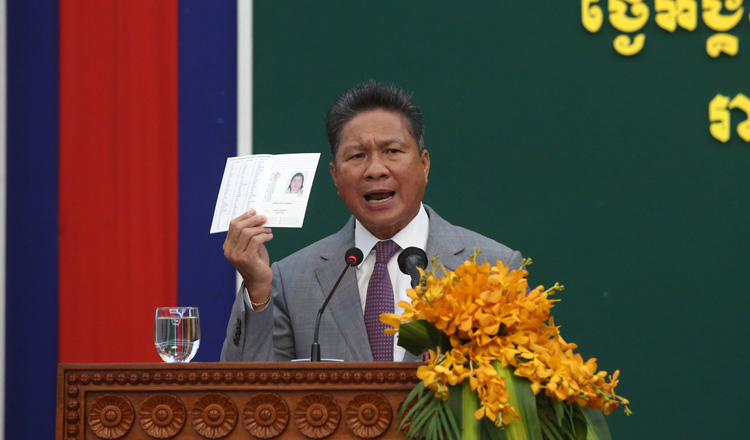 The Public Works and Transport Ministry announced yesterday it will issue international driving licences for the people in order to facilitate travel abroad.Speaking at a meeting on road safety in the first semester at the Ministry of Interior office, Minister of Public Works and Transport Sun Chanthol said the government will issue temporary international driving licences for people who need them for international travel between July and September. “People who have national driving licenses can apply to convert them to international driving licences temporarily, so they can be used abroad,” he said.He added the ministry will issue the driving licence in three categories: A, B and C. Meanwhile, Chanthol also said he is considering shutting down the railway to the airport. “I am thinking to shut it down as nobody is using the train during the pandemic. Also, shutting it down would avoid traffic accidents along it. However, I will discuss it further with the company,” he said. According to a report by the Road Safety Committee yesterday, in the first six months of this year, there were 1,619 road accidents, killing 816 people and injuring 2,449. Most traffic accidents were reported in Phnom Penh, Kampong Thom and Kandal provinces.The report said the main causes of traffic accidents were speeding, overtaking, drunkenness and vehicle malfunctions. Compared to 2019, the number of accidents had decreased by 552 or 25 percent. Fatalities also decreased by 172 or 17 percent and injuries decreased by 778 or 24 percent. Most fatalities were motorcyclists who were not wearing a helmet. Secretary of State of the Ministry of Public Works Min Manavy said in the first six months of this year, the police examined around one million vehicles, She said since the new traffic laws were implemented in May, police have fined 83,000 drivers, of whom 60,000 were motorcyclists. She said “Police fines have amounted to nearly $3 million. However, around 20 percent of people fined have not yet paid.”Minister of Interior Sar Kheng said the government has tightened traffic laws to protect the lives and property of the people and not to further burden people amid the pandemic. He said: “Traffic accidents are killing people every day, so critics of the new traffic laws are just trying to find excuses to discredit it.” National Police Commissioner General Neth Savoeun said the new traffic laws have reduced traffic accidents, fatalities and injuries. “The result of the enforcement has made drivers change their behaviour and obey traffic law,” he said.
បណ្ណបើកបរយានយន្ត វិស័យដឹកជញ្ជូន