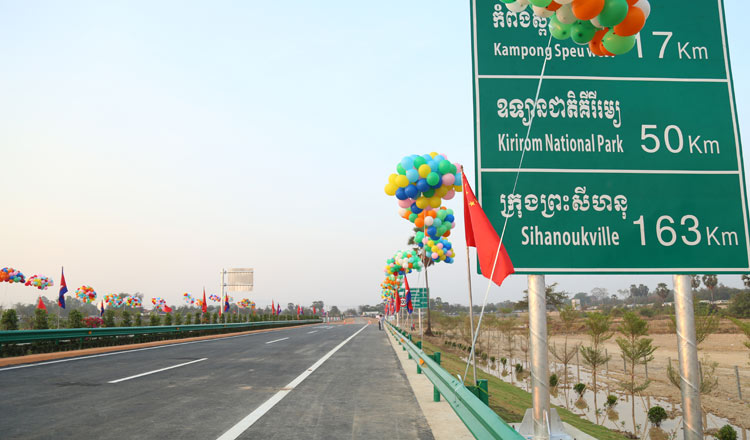 The first-ever expressway project in the Kingdom, linking its capital Phnom Penh to Sihanoukville, has reached 20 percent completion since construction officially commenced last year, according to the Ministry of Public Works and Transportation (MPWT).Speaking during a recent visit to the construction site, Yit Bunna, undersecretary of State at the MPWT, said all relevant ministries have worked closely together in order to iron out several issues and accelerate construction speeds. “We have sorted out 70 percent of the problems and are planning to overcome the rest by May this year,” he said.One of these issues is that more than 130 families from Kamboul commune, in Phnom Penh’s Kamboul district, who have been displaced to make way for the expressway, are seeking “fair” compensation from the government. “Step by step, we are working to compensate those affected. We have a clear plan,” said Vasim Sorya, a spokesman for the Ministryof Public Works and Transport, in response to the situation. Built by state-owned China Road and Bridge Corp (CRBC) through its subsidiary Cambodia PPSHV Expressway Co Ltd, it’s estimated that the final project cost will run to roughly $1.9billion. The finished expressway stretches 190 kilometres with a width of 24.5 metres. Last December, Prime Minister Hun Sen said as well as offering a better transportation service, the expressway will be more time-efficient and faster than ordinary routes. These are fundamental in serving the modern industrialisation of the country and facilitating international heavy transport activities.“Construction of the expressway is in line with regional integration in both Asean and the Greater Mekong Subregion – it will link regional transport networks from one country to another,” he said. Mr Hun Sen said that the new highway will enhance Cambodia’s transport capacity in tandem with the development of its globalisation. The expressway development is part of the Chinese government’s Belt and Road initiative, which encompasses an artificial island in Sri Lanka, a bridge in Bangladesh and hydropower projects in both Nepal and Indonesia.
ផ្លូវល្បឿនលឿនភ្នំពេញ-ព្រះសីហនុ Expressway