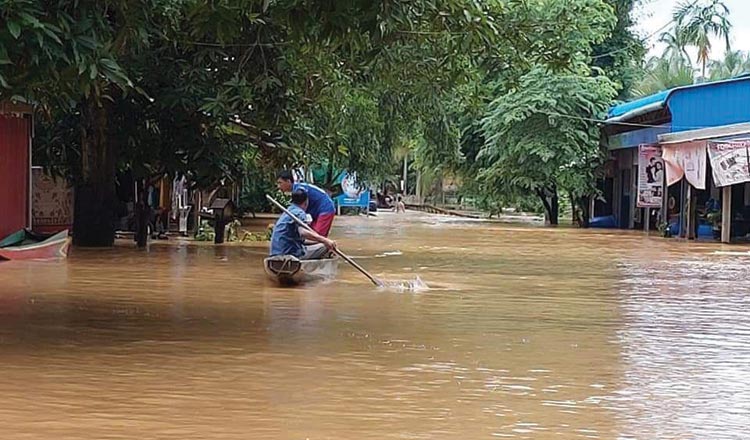 Transport Minister Sun Chanthol on Sunday said that 46 roads in 11 provinces have been severely damaged by floods and the ministry will repair them after water recedes. He said a total of 60 kilometers of roads, including national ones, were involved and the ministry had prepared a budget to fix all that were damaged. Mr Chanthol, who was visiting Kampot province to check on the road situation there, noted the 46 roads were in Mondulkiri, Ratanakiri, Kratie, Stung Treng, Preah Vihear, Kampong Chhnang, Tboung Khmum, Kampong Speu, Kampot, Kep and Koh Kong provinces. “The 11 provinces have been affected by floods, which have not only affected people’s houses, but also roads,” he said. “The 46 roads were hit by floods just a week ago and we think that more roads could be affected because the floods have not receded.” Mr Chanthol added that the ministry is keeping tabs on the situation in case roads in more provinces are impacted. “We have not yet calculated how many roads will be affected or how much repairs will cost, but we have already prepared both the budget and equipment to carry out the work once the waters have receded,” he noted. The Water Resources and Meteorology Ministry yesterday issued another alert for people to be careful because the Kingdom is being affected by low pressure from the Inter Tropical Convergence Zone until Sunday. It said that from yesterday until Wednesday, some provinces and Phnom Penh will experience low rainfall to moderate rainfall. “Some parts of the provinces near the Vietnam border may experience heavy rainfall,” the statement noted. It added that from Thursday to Sunday, almost all provinces in the Kingdom and the capital will experience moderate rainfall. “The ministry urges people to be more cautious about thunderstorms, storms and lightning,” the statement added. Prime Minister Hun Sen has created two working groups to manage disasters more effectively, including search and rescue operations. According to a letter signed by Mr Hun Sen dated August 26 and obtained yesterday, the two groups are the “Disaster Management Coordinating Team” and “Intervention, Discovery and Rescue Operations Team.” Mr Hun Sen assigned Kun Kim, first vice-president of the National Committee for Disaster Management, to head both teams. “The teams’ role includes cooperating with relevant both local and international partners, find funds, spread information on disaster situations, collect information from provincial committees to manage disaster and provide timely aid,” Mr Hun Sen said in the letter. The premier said that Intervention, Discovery and Rescue Operations Team’s main role is to save victims affected by natural disasters and also help evacuate people in the area or surrounding areas. Mr Hun Sen said that the two working groups shall hold meetings at least twice a year and, if necessary, they should have a plenary meeting at the invitation of the team leader.
វិស័យសាធារណការ ផ្លូវជាតិលេខ​ ១១