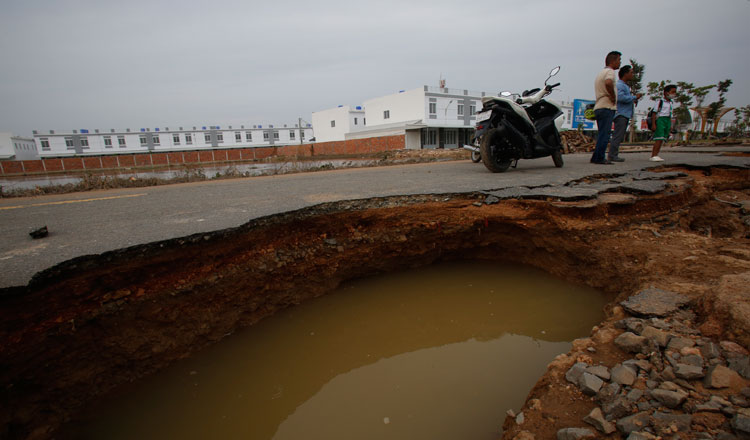 The Ministry of Economy and Finance yesterday organised an inter-ministerial meeting to assess the impact and discuss procedures to rehabilitate road and irrigation infrastructure damaged by the recent floods. The meeting was chaired by Vongsey Visoth, permanent secretary of state for the ministry, with participation from Lim Kean Hor, the Minister of Water Resources and Meteorology, representatives from the Ministry of Public Works and Transport and the Ministry of Rural Development as well as relevant professional officers. Speaking to reporters, Visoth said that after the devastating floods that affected many Cambodian citizens, infrastructures, houses and public property, the government has given top priority to three things to start the rehabilitation process. Those priorities included emergency relief and aid for the people affected by the floods, urgent repair of severely damaged infrastructures and rehabilitation of the irrigation systems and infrastructure including road and national roads, as well as taking into account the Green Infrastructure and Climate Change gradual integration projects. He added that development partners such as the World Bank, the Asian Development Bank, the Asian Infrastructure Investment Bank will help rebuild flood-affected infrastructure. Hout Sarim, undersecretary of state of the Ministry of Rural Development, on Tuesday also went to inspect eight roads in Kampong Chhnang province. Sarim found that eight roads covering more than 31 kilometres were damaged and the working group will now work to request the relevant ministries and relevant institutions to cooperate and speed up the rehabilitation of the roads in the province. A National Committee for Disaster Management report recently stated that about 627 kilometres of national and provincial roads were affected by the floods this year. Around 1,685 kilometres of provincial roads, about 271 kilometres of canal waterway channels and about 146 kilometres of irrigation systems were affected. Additionally, 134,003 houses, 951 schools, 307 pagodas, 284,961 hectares of rice fields, 97,029 hectares of subsidiary crops, and many roads, bridges, canals have been flooded and damaged.
News In English ការចុះត្រួតពិនិត្យស្ថានភាពផ្លូវ ជំនន់ទឹកភ្លៀង ទឹកជំនន់ធ្វើឱ្យខូចផ្លូវ