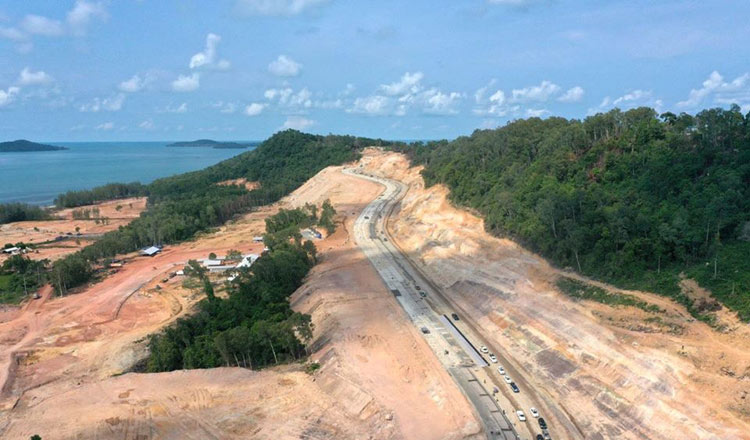 The Ministry of Public Works and Transport announced today the 90-percent completion of the rehabilitation of more than 30 roads in Preah Sihanouk in a bid to improve road access and strengthen tourism in the province. In November last year, the government, with the attendance of Prime Minister Hun Sen, began the $294-million restoration and expansion project of 34 roads, spanning 82.145 kilometres, on the country’s coast. The ministry said the rehabilitation seeks to repair the roads, which have deteriorated due to floods over the past few years. Moreover, it also aims to open a new page for Sihanoukville as a more developed city, making it an attractive hub for tourism and investment and an engine for Cambodia’s economic growth. “The government spearheaded and funded the construction of Sihanoukville’s roads to improve its quality, beauty and tourism and commercial potential,” said the ministry. Ly Rasmey, chief of the working group in charge of the reconstruction of Sihanoukville’s roads and sewage system, said the construction of wastewater treatment plans will be completed in 11 days, with its progress rate standing at 91.56 percent – nearly a percent faster than the project plan. Meanwhile, Mr Rasmey said the road rehabilitation is 86.44 percent complete – faster by 8.3 percent – and will conclude in 15 days. Defence Minister General Tea Banh today during his visit to the site expressed his pride for his ministry officials who took part in the project, which he deemed as an essential venture for the country’s development.
ផ្លូវទាំង៣៤ខ្សែ ក្នុងខេត្តព្រះសីហនុ ខេត្តព្រះសីហនុ វិស័យសាធារណការ