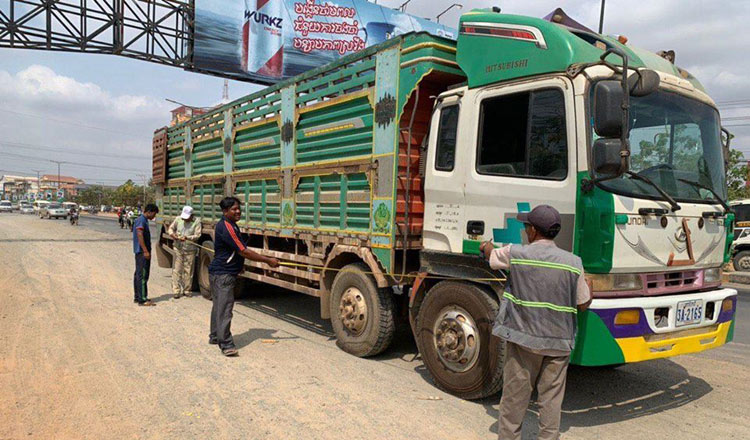 Weigh-in-motion vehicle scales and traffic smart cameras will be installed at two vehicle weighing stations in the middle of the year as a test run before installation is scaled up to all stations nationwide, the Ministry of Public Works and Transport revealed. The move is expected to improve the monitoring of overloaded vehicles in the Kingdom. Ministry spokesman Heang Sotheayuth said yesterday the new system, which will be installed in 28 vehicle weighing stations on 76 main roads, has been under assessment for more than a year. “With the use of this new technology, we expect to see a more efficient overload screening and enforcement,” he said. Mr Sotheayuth said the ministry plans to install weigh-in-motion scales and smart cameras at two vehicle weighing stations in the outskirts of the capital to test their quality and make necessary adjustments before the planned nationwide installation of the system by year’s end. “The weigh-in-motion scales will be buried 200 metres from the ground and will be connected to smart cameras, which can collect information regarding the passing vehicles. The new system can monitor whether the vehicles exceed their capacity limit, as well as count the number of vehicles passing through the station. The information will be automatically sent to traffic officials without them having to directly check the sites,” said Mr Sotheayuth. He added the automatic control system, which uses solar power and connects to an underground cable, is an independent and transparent solution to the management of overloaded vehicles. He cited instances where traffic officials allowing drivers of overloaded vehicles to bypass the weighing scales. Others, he said, went through rural roads to avoid the stations while some threatened station officers to avoid the scales. Last month, Transport Minister Sun Chanthol said the new weighing system will cost nearly $3 million. He advised officials at vehicle weighing stations to strictly enforce the law to prevent overloading, which he said was the main cause of road damage in Cambodia. Coalition for Integrity and Social Accountability coordinator Hin Yun yesterday expressed support for the ministry’s initiative. He added: “While we welcome the installation of this automated system, the ministry should also provide training courses for officials at the stations to ensure the proper use of the system. Officials must also be properly trained in their duties to improve quality of their work, accountability and transparency.”
ស្ថានីយ៍ជញ្ជីង ជញ្ជីងថ្លឹងឡាន