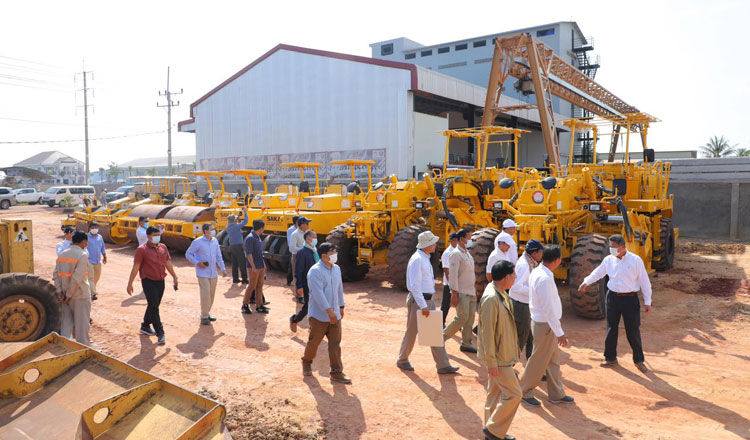 Minister of Public Works and Transport Sun Chanthol urged officials to expedite the construction of 38 roads in Siem Reap to be completed within 13 months after the groundbreaking ceremony set for the end of November. Chanthol said construction will be staged in six units, each divided into sections. The paved roads will be made with concrete, rubber and asphalt to be suitable for heavy freight vehicles. “Our ministry team will inspect the characteristics of the construction so that the units comply with technical standards to ensure quality, durability and longevity,” he said. The right of way is currently being cleared with machinery and the drainage system has been delivered for installation. Chanthol said he will focus on quality, efficiency and timely completion. He said the project involves the construction of four types of roads. The first is 25cm-thick reinforced concrete covered with asphalt. The second type is 20cm-thick concrete, but some parts could be as thin as 7cm depending on the geography and expected traffic. The third is foundation repairs without pouring concrete, and the fourth type is 15cm-thick concrete added to a stable foundation. “The departments responsible for the construction of these 38 roads include the Engineering Corps, Machinery and Road Construction, Road Repair and Maintenance, Wastewater Treatment System and the Public Works and Transport of Siem Reap province,” Chanthol said. “We also visited the extension of National Road 6 from the Royal Residence to the Jayavarman VII airport roundabout. This stretch of road will be extended to six lanes (three lanes in each direction). The middle lanes will be two-metres wide with a three-metre hard shoulder,” he said. A construction firm has already been signed for the road from Kralanh district to the city of Serei Sophorn in Banteay Meanchey province. Prime Minister Hun Sen on September 4 announced on his Facebook page that $150 million of the state budget was allocated for these road repairs. “While our country is currently facing COVID-19 cases, the development of the nation has not been affected,” he said. “The infrastructure of the 38 roads is expected to be constructed in the provincial cities to increase people’s living standards and raise the national economy,” Mr Hun Sen said. He said he plans to preside over the inauguration of the project, which includes a new road to Cambodia’s Angkor Wonderland by the end of 2021. He also thanked all ministries and institutions that did not waste money so that the government coffers have more than $600 million to develop the country. Deputy Governor of Siem Reap province Ly Samreth said that the construction of these roads is beneficial to the tourism and economy of Siem Reap, contributing to the growth of a green, beautiful city. He said that good roads provide a good welcome for both domestic and foreign tourists and enhances the atmosphere for residents. “This is a promising sign because the government is funding the construction of these roads. If we spent the provincial budget, it would take 10 to 20 years to complete,” Samreth said. The $100-150 million infrastructure project is scheduled to be inaugurated on November 30.
News In English ផ្លូវ៣៨ខ្សែ ​ក្នុងក្រុងសៀមរាប ឯកឧត្ដមទេសរដ្ឋមន្ត្រី ស៊ុន ចាន់ថុល ផ្លូវជាតិលេខ០៦