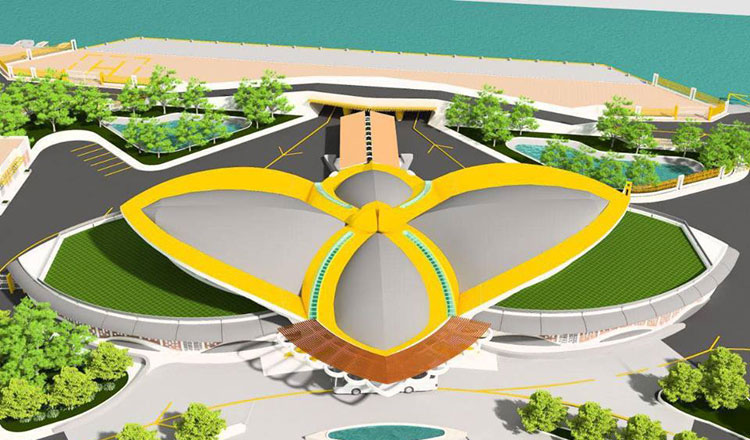 Kampot province’s new tourism port project has reached 55 percent completion, says the Ministry of Public Works and Transport (MPWT), but a redesign has caused additional delays beyond those already visited on the project, courtesy of the COVID-19 pandemic. The $8 million project made viable with a loan from the Asian Development Bank (ADB), was set to have been completed and open for operations by the end of 2021, but has now been projected for completion in early 2022, according to the MPWT. Heng Sothy, head of the department of Waterway Infrastructure and Port Construction for the MPWT, said: “We decided to have a re-design of the main terminal building and the pier because it was recently observed that the first design was not good enough and therefore additional design and planning for different structural specifications were required.” “The physical construction of the whole project is anticipated to be completed during the third quarter of 2021 and the project is expected to be completely finished by the end of 2021. The opening ceremony for the Kampot pier project [is now projected for] early 2022,” Sothy concluded. Located in Tek Chhou district, the seaport is 300 metres long and capable of accommodating vessels carrying 300 to 400 passengers. Soy Sinol, director of Kampot Provincial Tourism Department, said: “Once the seaport is completed and put into service, it will contribute to boosting the province’s tourism, particularly via tourism packages that link Kampot province with destinations in Vietnam and Thailand.” An ADB report on tourism in the Greater Mekong Subregion says the seaport is expected to service 360,000 international and domestic tourists per year once it opens.
គម្រោងកំពង់ផែទេសចរណ៍ខេត្តកំពត News In English